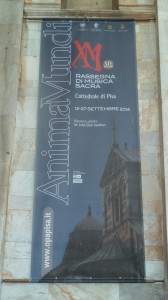 In 2014 Pandolfo have been unanimously proclaimed winner of the prestigious “Anima Mundi” International Sacred Music Competition, promoted by the “Opera della Primaziale” in Pisa to celebrate the 950th anniversary of the foundation. The “Te Deum Laudamus” for soli, chorus and organ, had the official compliments of the jury panel which was adorned by the names of: Sir John Eliot Gardiner (President), M° Guido Corti, M° Mons. Marco Frisina, Mons. Aldo Armani, M° Antonio Greco. The "Te Deum Laudamus" was performed in the Pisa Cathedral Sept. 23th, 2014 and Oct. 05, 2014 in Cremona. 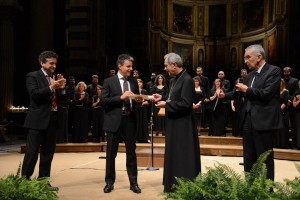 Te Deum is a hymn that set up its roots in the millenary story of the Church. It's a prose "cathedral" which testifies the essence of Christianity.

The composition is based on the first three notes of gregorian hymn. Three notes and three intervals are expanded, overlaid and shaped to new melodic ideas. The score evolves by alternating the main theme with other passages. The prim vision is the hand fingers (five) merging into a pair of clasped hands.

It's a symbol of thanksgiving and reconciliation. However the path is fraught with obstacles. It's a walk without stops which crosses chromaticism, sudden modulations, rhytmic overlapses and moments in which harmony alters into an unsteady series of perfect fourth. This is very similar to the weak nature of humanity which always contradicts itself and it is unable to find the solution to its failings.

This harmony sounds sophisticated, persistent and overbearing until suddenly undergoes an unexpected transformation. It is the second part of the scores that introduces layers upon layers of sweet instrumental sounds based o the primary accord; followed by endless and unresolved adjustment. It's a basis made with only three bars in which the melodic design is formed from descendant intervals always different and disclosed by a rest on time forte.

This section communicates an anguish full of humility and carries on itself a new motif, simple and limpid, which flows into new dialog between soli and choir.

This is an ample, rich dialog that grows into a new dimension. Sounds of the first part has now a different nature: it is in perfect harmony with the ne awareness.

The end is a flow of gratefulness toward the endless mercy of God, the choir rises to a firm guarantee; up to climax, when the choir sings “I will not be confused” and the tenors give their last cadence. “In aeternum”.